Elvira of Castile, Countess of Toulouse

Diminutive, soft spoken woman who sees more that it seems

Elvira has alabaster skin, long curly red hair that flows well past her waist and half hooded, rich amber eyes. Her voice is soft and dusky. When at court, she can affect a timber that resembles a rich brandy or softest velvet caress and many nobleman is said to have been swayed to one deal or another fin an attempt to gain a smile or laugh from her lips.

On the battlefield, it’s rumored she is as sharp as the steel at her side. Her movements are precise and does not indulge in flourish. One commander said of her “It is not unlike watching someone play out and elaborate chess game on the battlefield.”

She is often described as remaining even keel no matter the situation and it is rare that a servant or guest has ever seen her in fits of temper.

Elvira is the daughter of Alfonso victoriosissimo rege in Toleto, et in Hispania et Gallecia. The ruling family has a generations long secret. They know – and are quite comfortable with – the fact they are a puppet ruling family.

No one outside the family has ever known this, though there are whispers here and there when certain, seemingly irrational, decisions are made.

The women were married off to secure greater and greater allegiances while the men were set to rule closer to home.

This was Elvira’s lot and one she learned and looked forward to with relish. The opportunity to play intrigue at court and secure greater allegiances and safety for her family’s benefactor was one she intended to seize and use to bring honor to her family.

She was married off to Raymond IV, Count of Toulouse in 1094 and was in the process of starting the “information trade network” in her new Condato when the First crusade hit. Being wise enough to know the power in the church, She joined him on the crusades and fought on the front lines.

Her battle strategy was well known and the honor she brought kept the eyes off her family and their lands for years. But it was not to last. Thanks to her fledgling information network, she received notice of the betrayal that would mean the loss of not only her Condato but also her family holdings and spirited away under cover of night.

She sent warning to her family’s benefactor to warn him of the impending attack and the location of a newly acquired safe haven should he have need of it. That deed earned her embrace.

Elvira of Castile, Countess of Toulouse 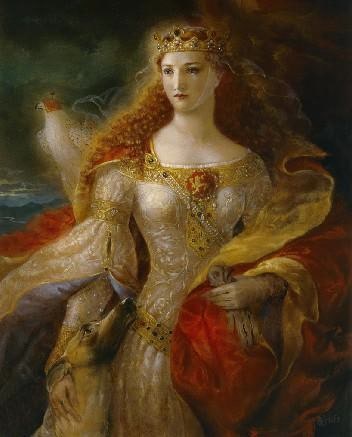